I went to the Glades this morning at 10 am hoping the northerlies would have brought some finches down,  I went round for an hour only to find a couple of small flocks of goldies with one or two redpolls thrown in,  all very flighty.   Eventually I was just about to give up and go home when I suddenly saw the flock I was looking for,  the sound and the flying round and back down onto the trees was unmistakable,  there were at least 30,  they must have arrived today. 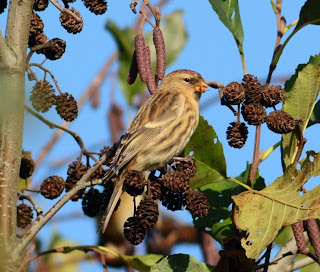 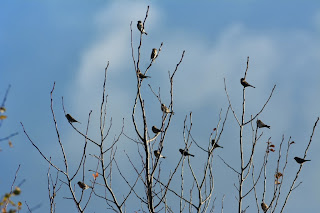 Part of the flock 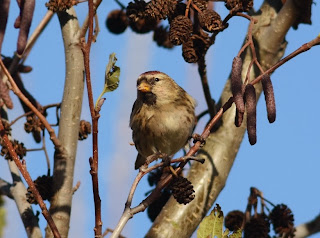 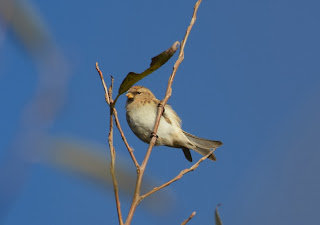 Hope they are
here to stay 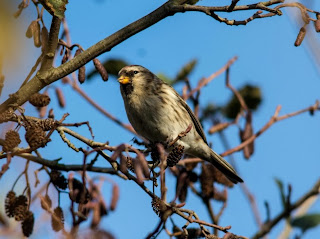 What a beautifull cold sunny morning this was,  Our plan on dark dreary monday was to go to Southend pier on tuesday and get ( flight photo's) of Med Gulls amd any bonus that might turn up,  the forcast was splended,  best day of the week.   We had not been to the pier for some time so we were looking foreward to some serious just the right bright day photography,  so we parked just down the road at 9.30 and put our £5 worth of parking fee in the machine and marched briskly and happily to the entrance of the pier,  to be greeted with  (  The Pier is closed Mondays and Tuesdays from 4th of November to March 2014) AAHHHHHH!   The only consolation was we wern't the only ones.    Enthusiasm eventually came back and we went off to Westcliff and found a mob of Splended Sanderlings,  counted 60 of the busy birds,  one or two ringed and some with oil on them.   Then off to Two tree Island with high tide approaching and always a good display there,  but strangely there were no Black-Tailed Godwits. 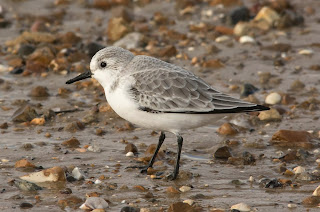 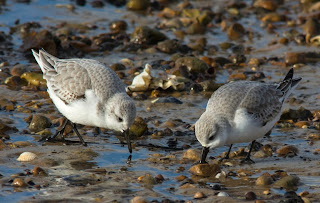 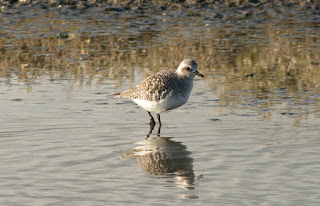 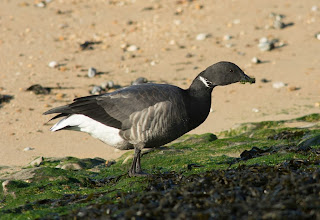 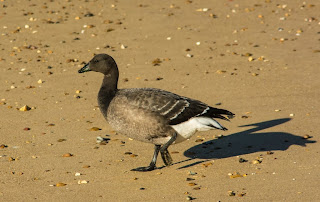 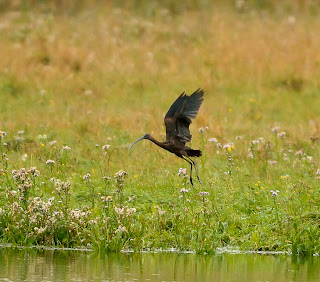 Russell and I decided to take a look at Bowers Marsh despite the terrible weather,  plus side,  there was nobody else there, sensible people.   On arriving at the carpark after a bumpy ride we saw the farm with the cattle feeding inside,  and the pleasant farmer,  who gave us some advice on where to go.   With the Farmer the farm and the misty landscape I thought of Lakenheath.   We soon found the Corn Buntings along the (Lane) and eventually the large scrapes with some good areas of Phragmites which produced 7 Bearded tits, 5 Cetti's Warblers and some Water Rails.   At the same place on the left is a large plantation of small willows,  with a ditch between them and the path,  it was here we saw around 6 Stonechats all together.   We carried on walking the path until eventually arriving back at the carpark, about 3 miles,wet!   Other birds seen Redwing, Fieldfare, Snipe, Woodpeckers, Little Egrets, Heron, Finch flocks.   It's going to be a great place.  There must be before long,  Leo's,  Bittern, small  migrants ie;  Whinchat,  Wheatear and the such like. 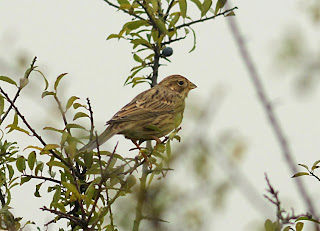 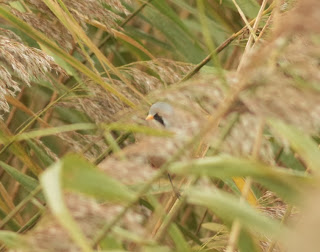 Well it is my first Bearded for Bowers.
Posted by DMcG HX birder at 07:36 No comments:

Stayed a week at my daughters in Downham Market and managed a few days out birding in the area.   I only went to two places,  Lynford Arboretum and Santon Downham,  both places were very active.   At the Aboretum the Crossbills are still showing well with a few Two-Barred amongst them,  the bonus was Hawfinches suddenly appeared in the same area, not at the paddock but round the walled garden opposite the larches and shed,  seems that they often feed in that area,  one was feeding on holly berries,  beautiful birds!     The Crossbills while I was there stayed at the tops so photo's were difficult but that didn't matter.   Plenty of other birds here as well.       At Santon Downham the Beech Mast is Terrific this year and I found the Bramblings almost numbered the Chaffies even at this early stage.   Plenty of other birds here also. 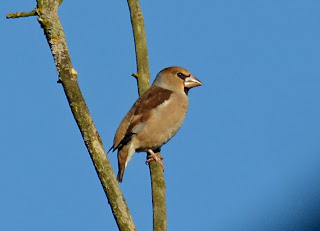 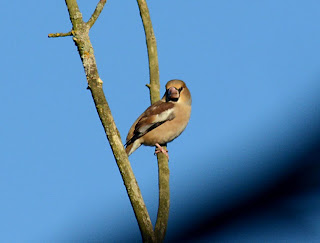 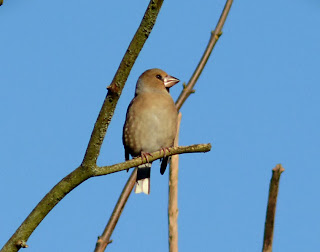 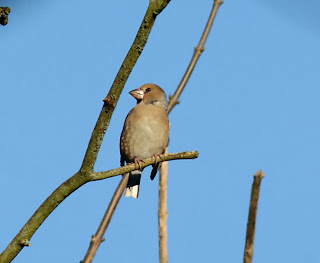 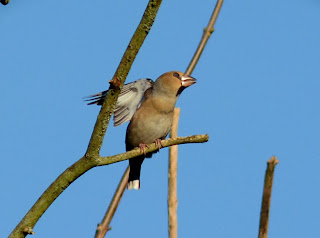 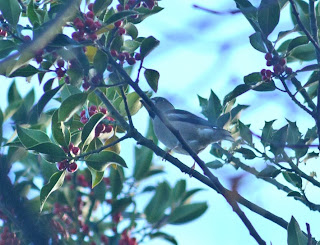 This one was eating the berries 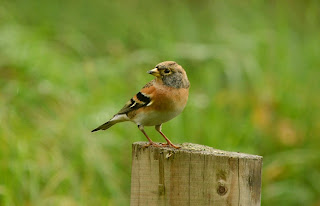 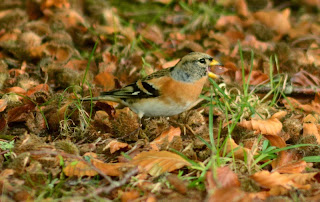 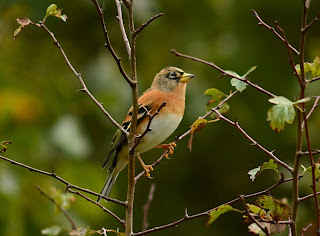 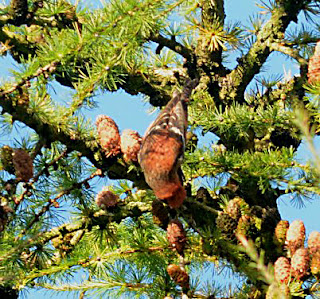 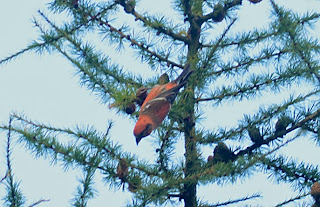 Not this one though. 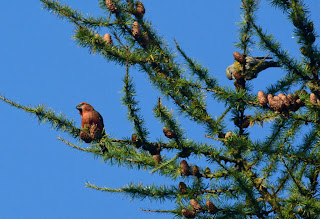 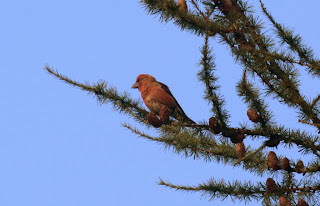 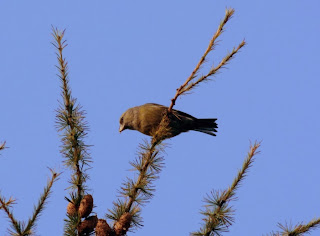 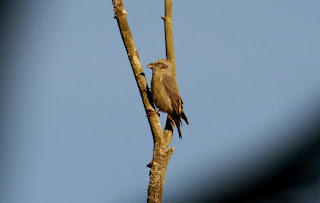 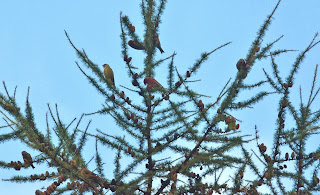 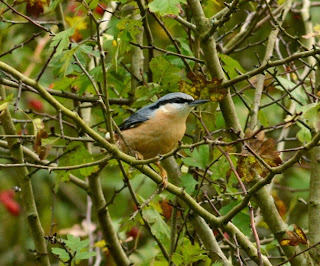 Plenty of these about.